Canine Influenza is caused by two specific and distant Type A canine influenza viruses. These two viruses have been classified as H3N8 (commonly referred to as the “original” strain) and the H3N2 (the “newer” strain). Both strains have infected dogs in multiple U.S. cities with H3N8 been documented in 41 states.

In 2004, the H3N8 (original strain) was first documented in Florida racing Greyhounds. The H3N8 virus originated in only horses but adapted to infect dogs. Conversely, the newer H3N2 strain evolved from an avian flu virus version that has also adapted to infect dogs. Initially detected in South Korea in 2007, the H3N2 dog strain’s first U.S. appearance was in Chicago then in Atlanta early in 2015.

Infected dogs will develop their initial symptoms within 2 – 4 days following exposure from an infected animal, contaminated flooring, or a fomite. The symptoms of dog flu are virtually the same as those of the other “kennel cough” organisms. Since the H3N2 strain is new to the American dog population, nearly all dogs exposed to this virus will become infected with approximately 80% of them developing varying degrees of illness. The common clinical signs seen include: coughing or gagging, mild to high grade fevers, nasal and ocular discharge, and decreased activity.

More serious cases will develop depression, anorexia, dehydration, and possibly breathing difficulties. Depending on the dog’s age, the patient’s immune response and/or secondary bacterial infections, an uncomplicated illness can quickly become more serious or even fatal.

In the 2015 Chicago epidemic at least 6 dogs died.

Fortunately most flu cases are mild and short lived, however is some patients the symptoms can persist for several weeks. Unlike most of the other respiratory canine diseases, dogs affected with the influenza virus may infect other dogs and their environment for up to 30 days even though they appear clinically normal. 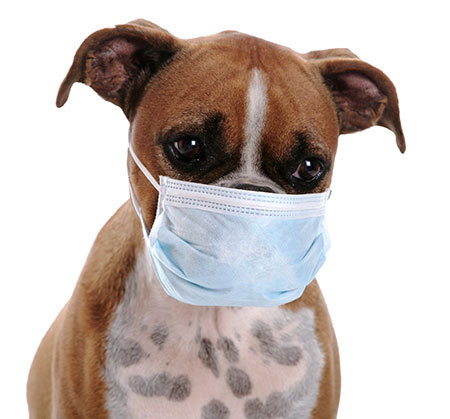 Since the respiratory signs are not specific for canine influenza infections, a confirmatory diagnosis requires a nasal or pharyngeal swab for PCR testing. Early sampling greatly increases the chance of capturing the viruses during their peak shedding period. For several reasons, even the PCR test can have a false negative result. Therefore to maximize the probability of a positive PCR result, the swab should be taken on day 1 or 2 of the onset of symptoms, the sample should be sent in a sterile tube of viral transport media, and then shipped overnight. The Kansas State Veterinary Diagnostic Laboratory (KSVDL) offers a canine respiratory diagnostic panel that can detect nine different respiratory pathogens including both canine influenza viruses.

The specific treatment prescribed depends on the severity of the infection and possibility of secondary bacterial invaders. The various therapy recommendations range from general supportive care (rest and fluids); to antibiotics and cough suppressants; to quarantine with aggressive hospitalization for the more severe / complicated cases.

While the best prevention is to avoid contact with an infected animal or high risk locations, that is not always possible. When potential exposure cannot be avoided, proper vaccination can prevent or decrease the symptoms and reduce the duration of the illness. There are two vaccines available against the original H3N8 strain, although it is unknown whether these vaccines will provide any cross-protection against the new H3N2 strain. Fortunately the USDA has granted a conditionally licensed new vaccine against the H3N2 strain.

In veterinary hospitals, boarding facilities and shelters, the canine influenza virus appears to be easily killed by disinfectants commonly used in these facilities, such as quaternary ammonium compounds, aldehydes, phenols and bleach (1:30) solutions.

For more information on Canine Influenza testing, go to www.ksvdl.org or please contact Client care at 866-512-5650.

Next Article: Considerations for Shipping Samples in the Summer
Return to Index